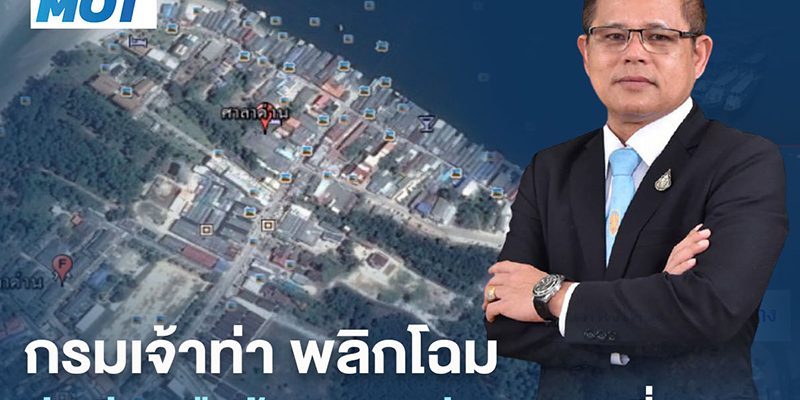 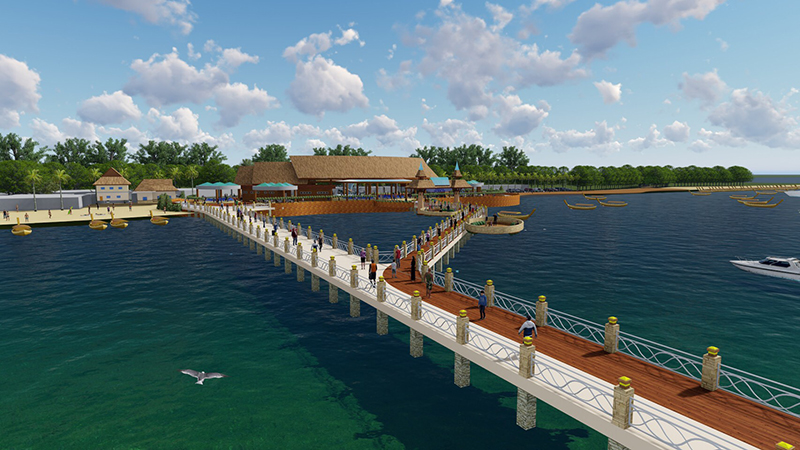 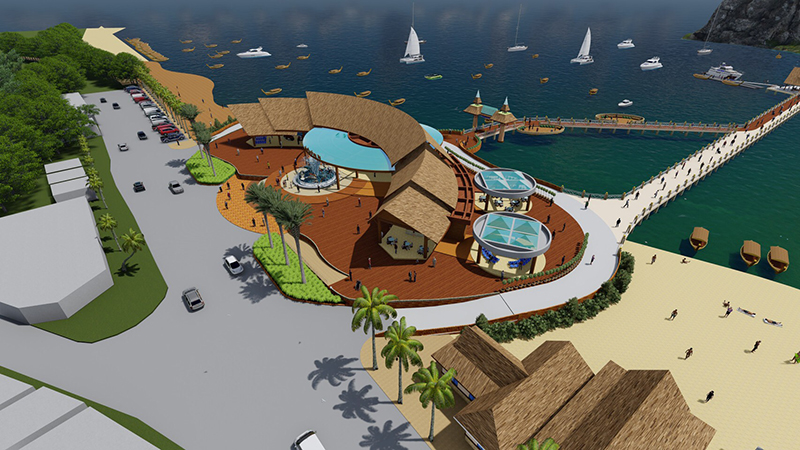 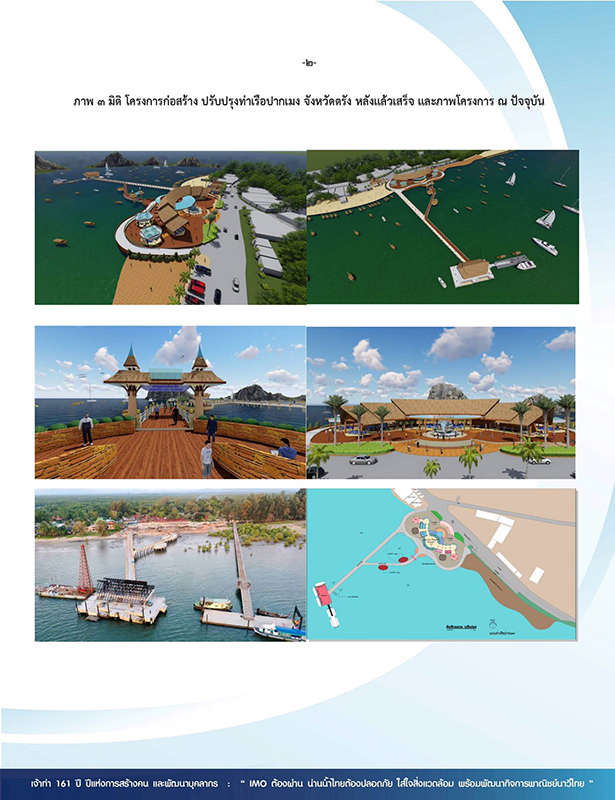 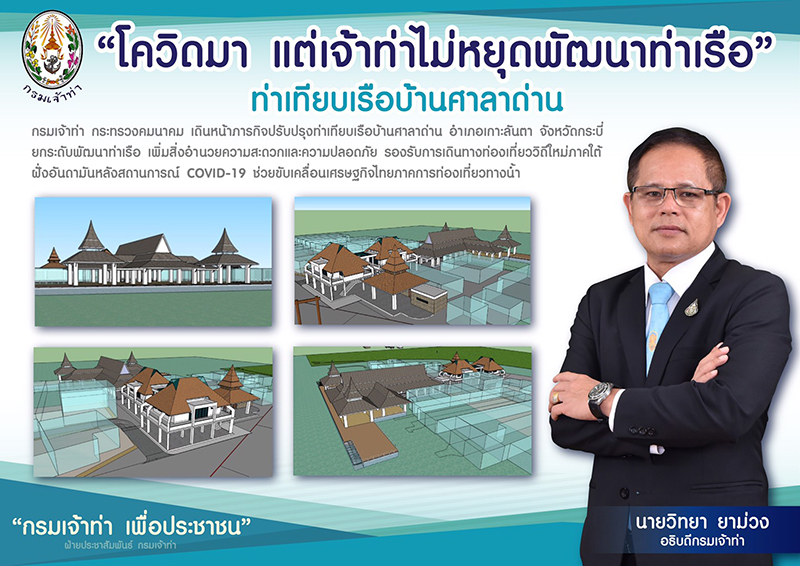 Mr. Wittaya Ya Muang, Director-General of the Harbor Department revealed that Ban Saladan pier Located on the coast of Baan Saladan, Tambon Saladan, Amphur Koh Lanta. Krabi Province More than 1,000 people and tourists travel in and out during the festival and there are no less than 70-80 boats per day, the port size is not more than 20-50 tons. Continue to other attractions such as Phi Phi Island, Phra Nang Bay, Phuket Province, Koh Rok, Krabi Province. Islands in the sea, Trang Province, Koh Lipe, Satun Province

Currently, it has been used for a period of more than 10 years and the size of the berth and the passenger terminal is insufficient to accommodate tourists. Especially during rush hours Which the Harbor Department has foreseen the importance By increasing facilities and safety By expanding the new jetty to size 10 × 75 meters, the bridge entrance to the jetty is 6 meters wide, the roof covering the bridge and pier. Expansion of the passenger terminal building size 11 × 20 meters, the number of 2 units installed electric system. Fire protection system Computer system Landscape architecture work And other improvements According to the construction pattern that is modern and standardized which the Marine Department has hired Pattana Bannakit Limited Partnership is expected to be completed by the end of April 2021.

The project to improve Ban Saladan Pier. To accommodate the increasing expansion of tourists, both Thai and foreigners. Providing equal and equal access to the transportation system within Krabi Province While promoting the image of tourism to an international standard This is to raise the level of the jetty to have standards and safety. It also supports travel to Phi Phi Island, Krabi Province. As well as being able to support travel links in all dimensions It is expected that after the COVID-19 situation, there will be a lot of tourists coming to Thailand.

The Harbor Department is ready to support and promote the industry. The tourism sector is in line with the policy of the Ministry of Transport. And the Government of General Prayut Chan-o-cha, Prime Minister in driving the 20-year National Strategic Plan for Tourism Ready to upgrade the development of a new port in the style of NEW NORMAL to be a port that has the potential to connect tourist attractions in the region for sustainable tourism in the future

Mr Wittaya said that the Harbor Department has the main mission to supervise and develop the country's water transportation. As part of the development of the country's water transport infrastructure in order to promote and support the country's tourism, the Harbor Department has therefore proceeded to develop and improve programs. Elevate the harbor Supporting new types of tourism in the future On the Andaman Sea Gulf coast Including Pak Meng Pier, Trang Province, Andaman side to accommodate tourists for convenience and safety Ready to support the water or marine tourism industry, which is a major highlight of Thailand.

Thailand currently earns income from tourism by sea. It has the highest proportion when compared to other forms of tourism. But the effects of COVID-19 That happened all over the world Causing the number of tourists to decline Therefore need to adjust the new method In addition to supporting Thai, Thai tourism Building a port is also important. The Harbor Department collaborates with several agencies to revive the maritime tourism strategy in conjunction with the tourism strategy and the port development strategy.

Pak Meng Pier, Trang Province is considered an important port of the Andaman Sea and is another famous tourist destination in Thailand. The Pak Meng Pier has to be renovated because it has been in use for more than 30 years and is in disrepair. And very crowded The size of the port is not enough to meet the needs of the users. Especially during the holidays Or festivals There are large ships, long-tail boats and speedboats entering the service up to no less than 100 ships a day. The Harbor Department has hired Pattana Business Partnership to develop and improve for 630 days. All groups of people (Universal Design & Service Design) are expected to be completed in April 2021.

However, after completion, there will be a complete implementation. With a port area that is ready to accommodate tourists easily and safely The area at the back of the pier has a functional area that can facilitate In accordance with the needs of tourists fully This will help promote tourism for Trang Province and also serve as a port that connects the Andaman coast such as the Pak Meng – Koh Lipe route. Pak Meng – Koh Lanta It generates enormous income for the local and the country. Ready to support the increasing expansion of the local people to access the equitable and equitable transport system Supporting future connections, get off a plane, connect a car, get on a boat to travel to the islands in Trang Province. Born into a sailing route “Ring Andaman" in the future.